Just added to your cart

The Turismo Racing Infinity 2023 offers an upgraded level of personalized productivity and unrivaled performance. With cutting-edge cable management that incorporates neodymium magnets, you will never have a cable fall off your desk again. Premium bespoke materials, more durable than ever before. Improved pro-grade ergonomics for serious performance. This desk is the perfect hybrid of gaming and productivity.

Infinity
The Infinity Desk has a Full-Surface Mousepad that will change the way you work. It features built-in stealth wireless phone charging and USB ports strategically placed on the desk. The amount of workspace it provides is enormous, making it the last desk you will ever buy.  Guaranteed, or your money back.
Turismo Racing Infinity is an innovative productivity desk, developed by our Italian design team to maximize aesthetics, functionality and comfort. We spent nearly two years collaborating with top teams to maximize its function, reliability, and stability. Infinity is the big brother to the Stazzione, uniquely offering USB-C and USB 3.0 ports, audio I/O and electric power ports. The Infinity is only offered in Black, while the Stazzione is offered in four attractive colors to serve the desires of any gamer as the apex of your battlestation. We also offer a LED desk called Autodromo. 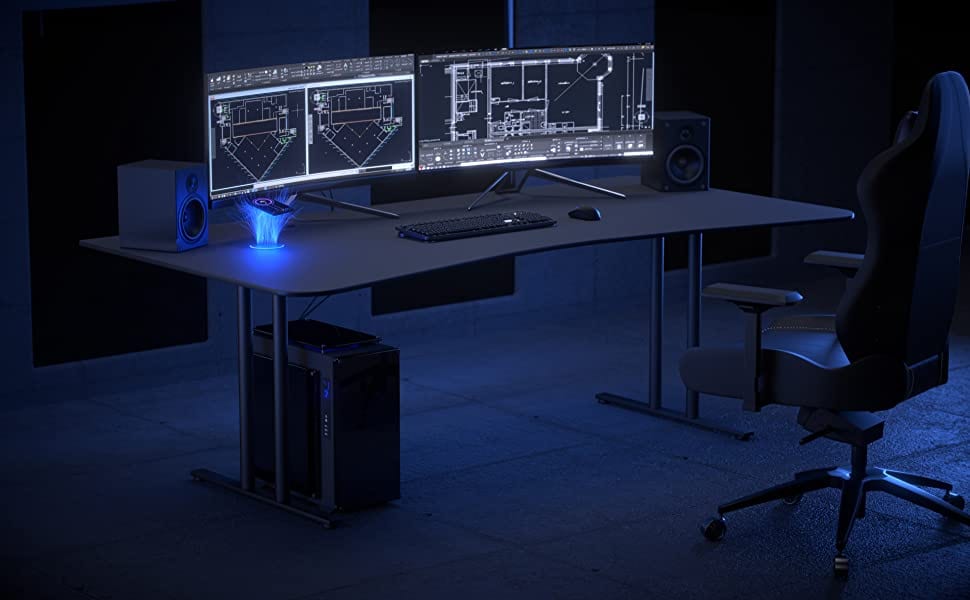 Wireless Cellphone Charger
A wireless charging pad in the desktop allows for easy charging of QI enabled cell phones, such as the newest models from Apple, Samsung, LG, and Huawei. Features the newest QC 3.0 chipset, capable of charging your iPhone 12 in 90 minutes!
Cable Management Raceways
The Infinity has 3 cutouts in the desk and mousepad surfaces so you can hide monitor, mousepad, and keyboard cables in the steel wire raceways underneath the desk, for a sleek hidden-cable look. Each of the two wire trays can support up to 25 pounds, more than enough to hold the heaviest AC Adapters and surge protectors. 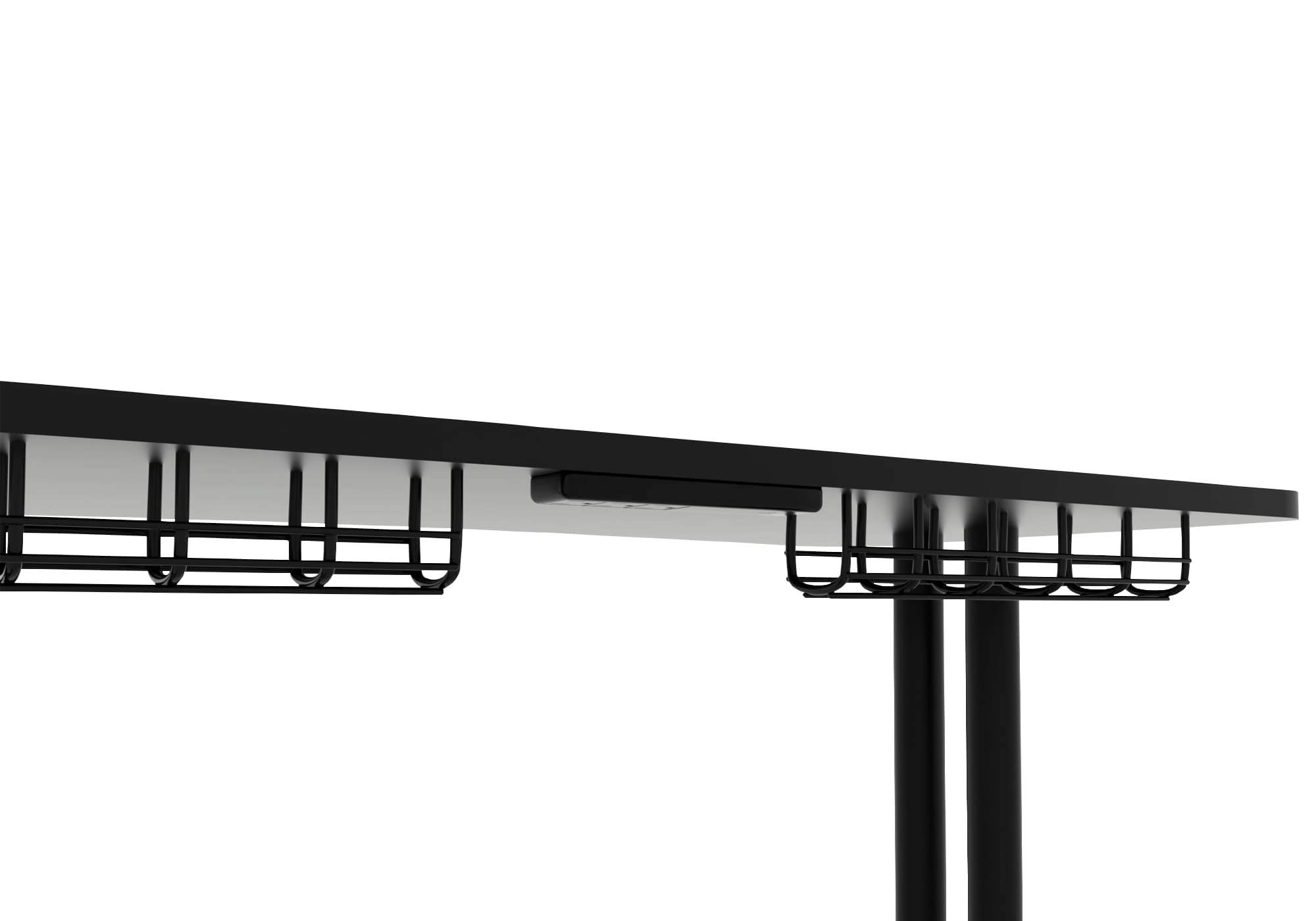 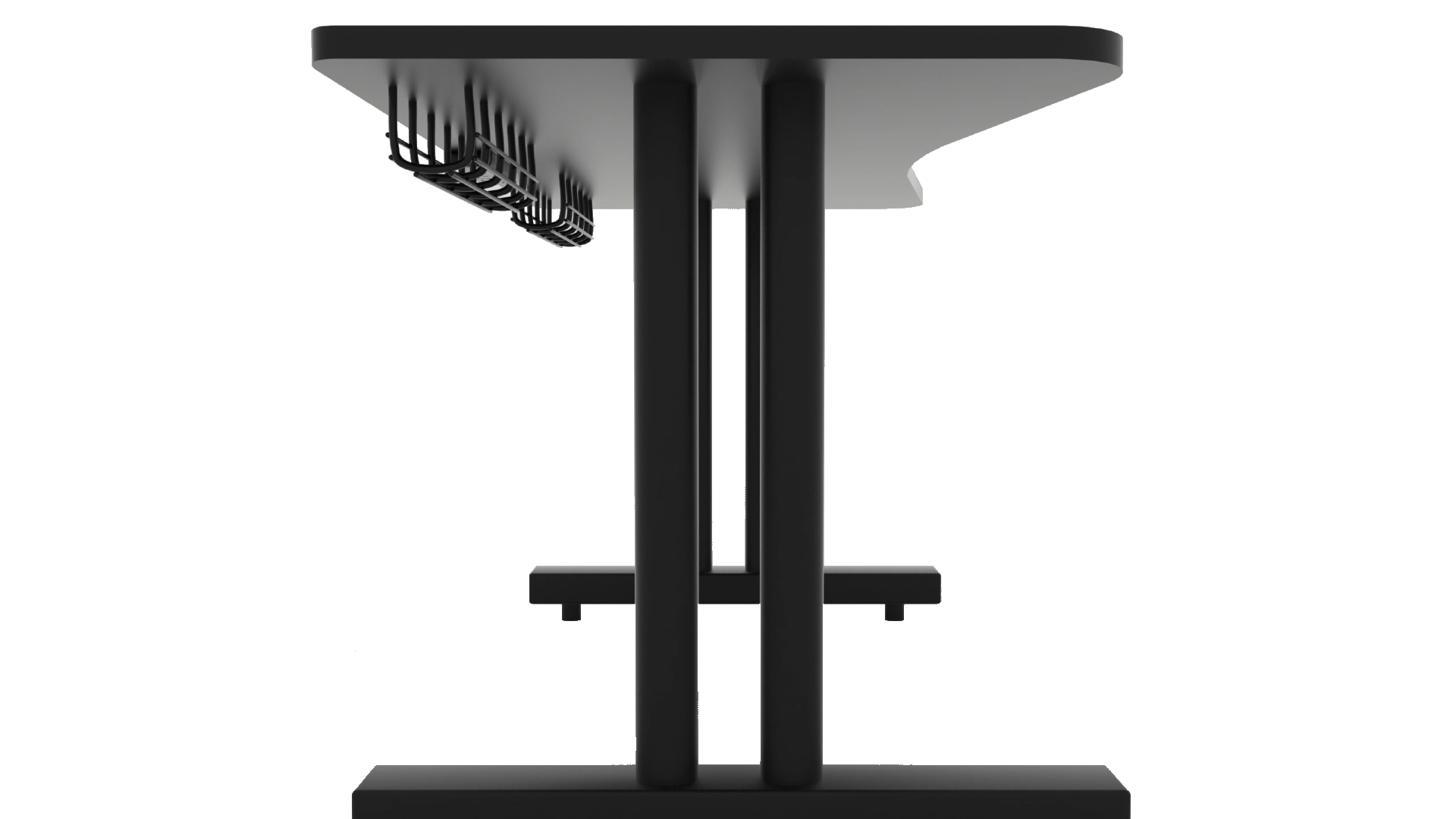 Dual Support System
A single piece of steel stretches across the entire underside of the Infinity preventing the wobbling that you find in other gaming desks. Each side of the desk is supported by dual steel posts to ensure stability of up to 240 pounds of desk weight. 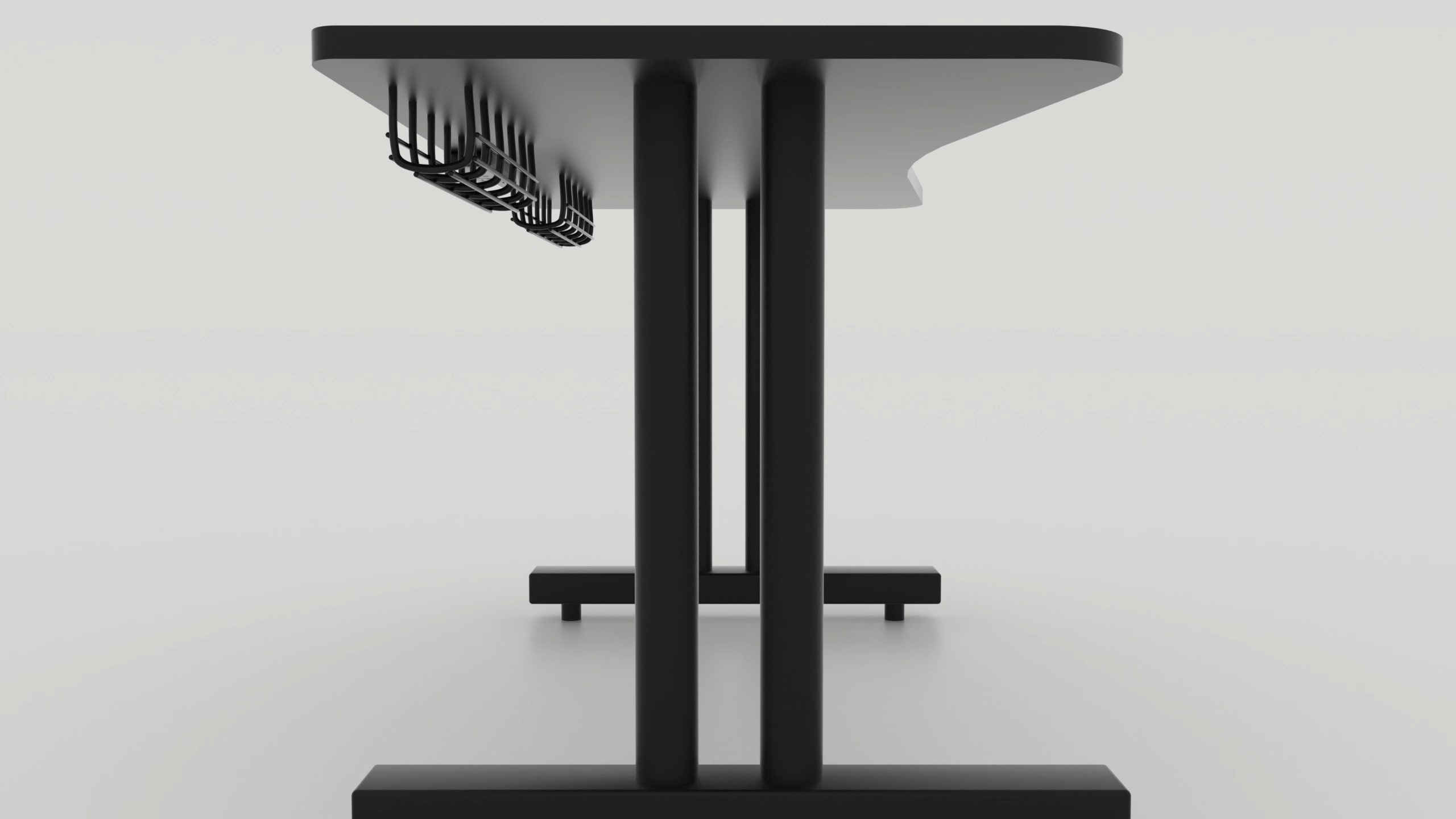 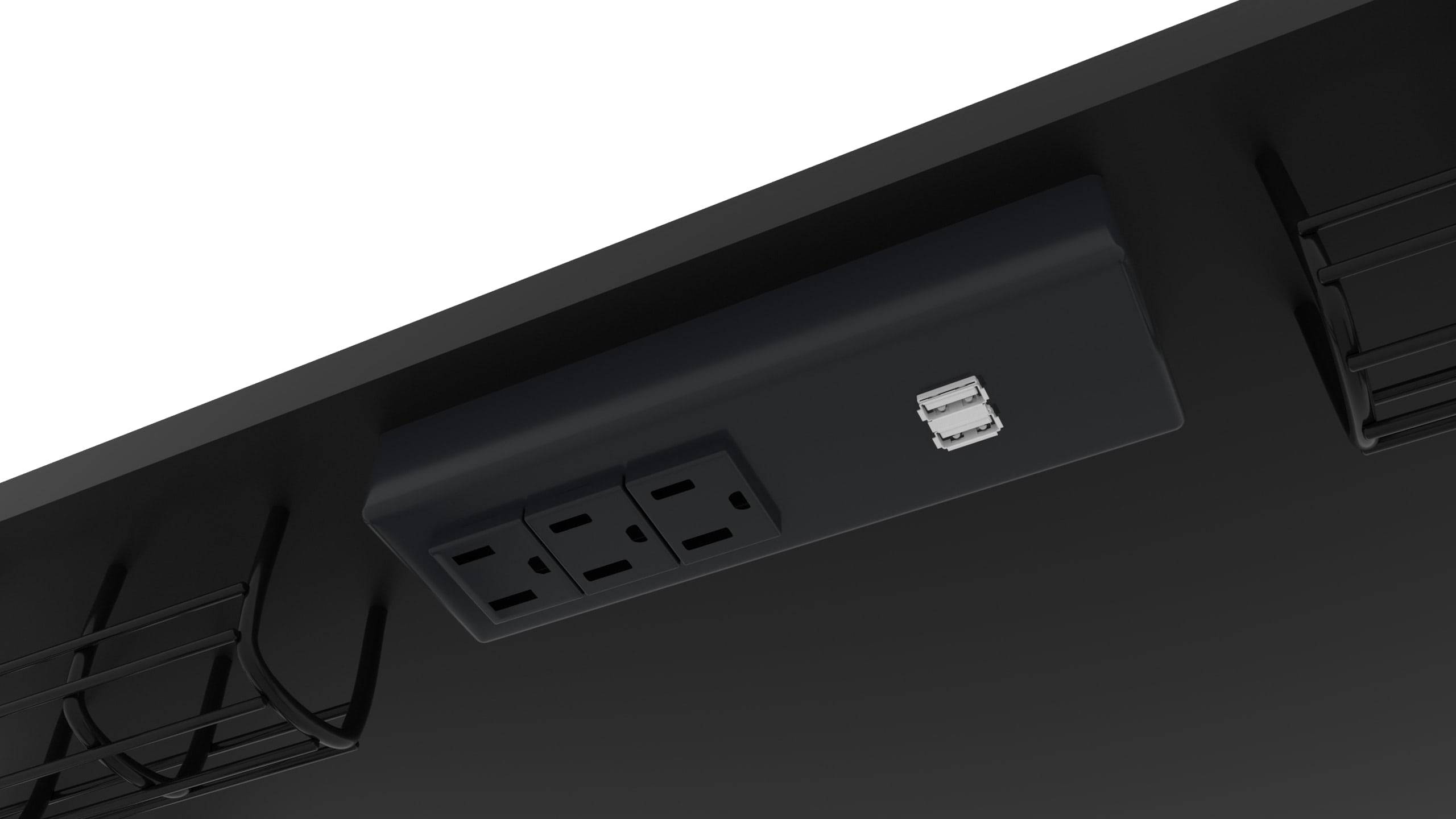 Power Strip with USB Ports
These days, in a world dominated by devices and appliances, just one or two power outlets simply aren’t enough in most situations. A Power Strip with 3 sockets and 2 USB Ports is included for you to be able to connect or charge all of your devices, without ever having to worry about space again. 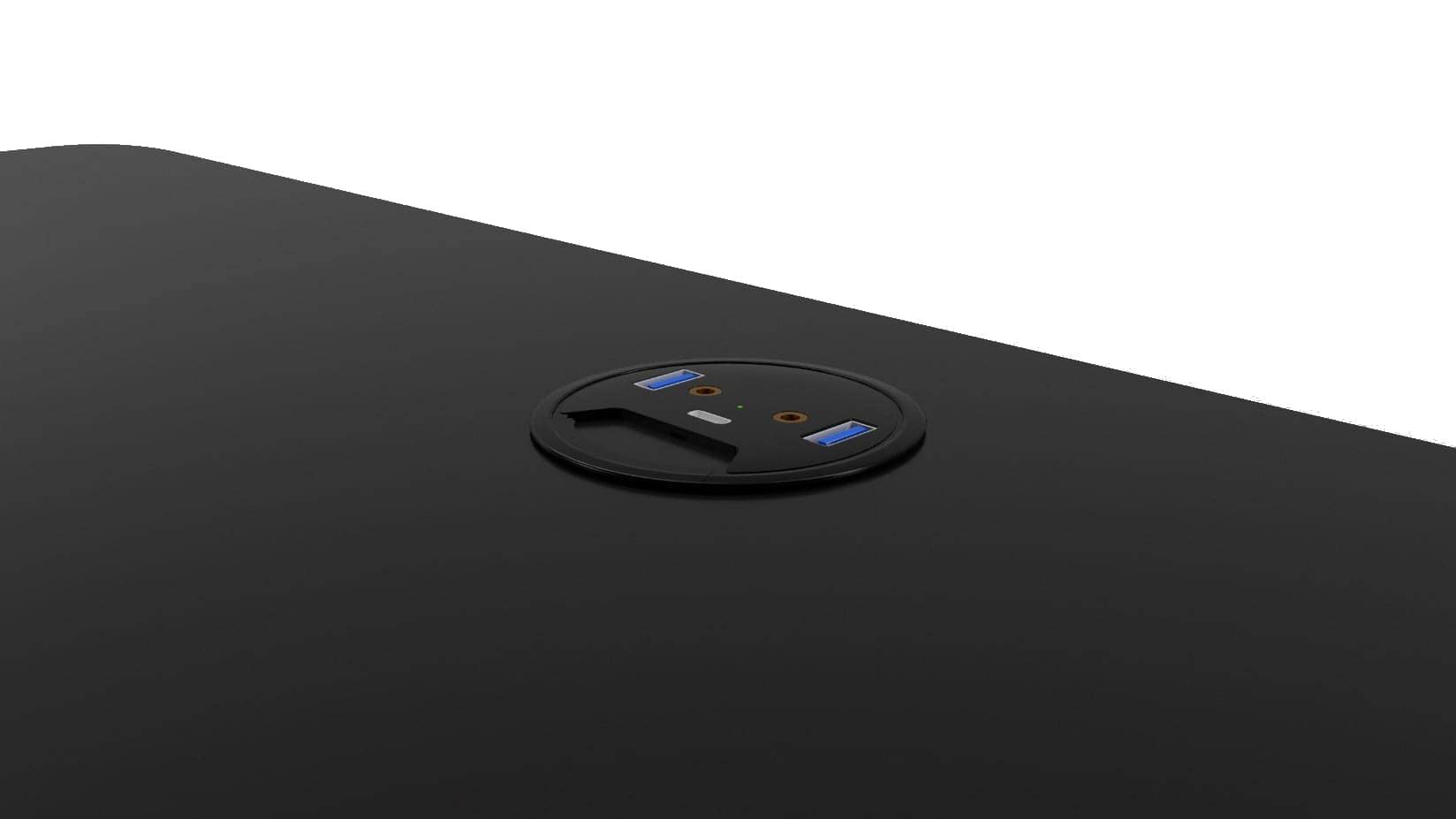 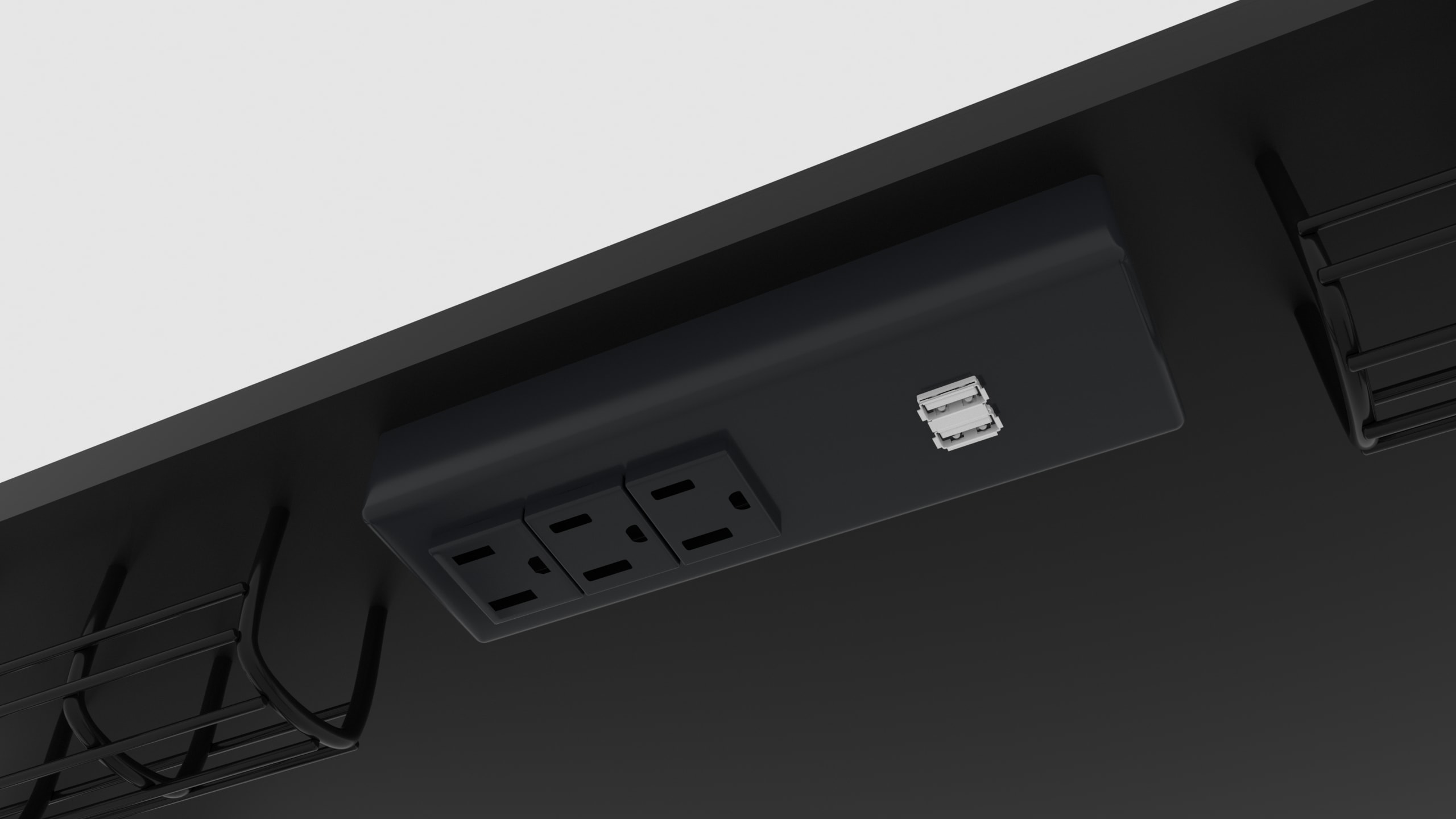 USB-C and USB 3.0 Ports
A USB Hub is flush mounted onto the desk, and can be connected to your PC for data transmission or a wall outlet if needed to power peripherals.
This Hub includes two USB 3.0 ports, a USB-C port and audio I/O ports.
There are additional USB ports and power ports on the back of the desk to power all your peripherals. 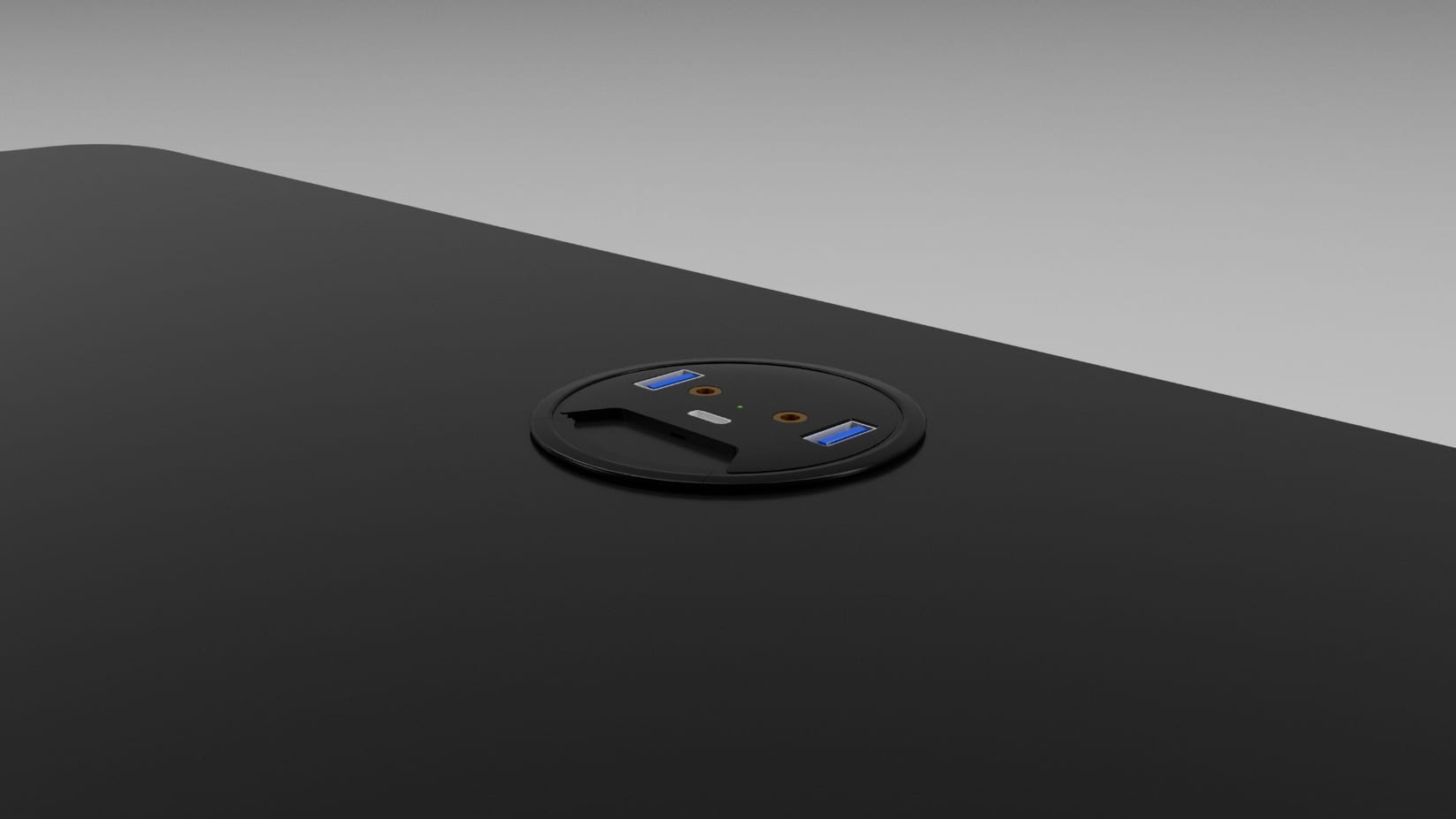 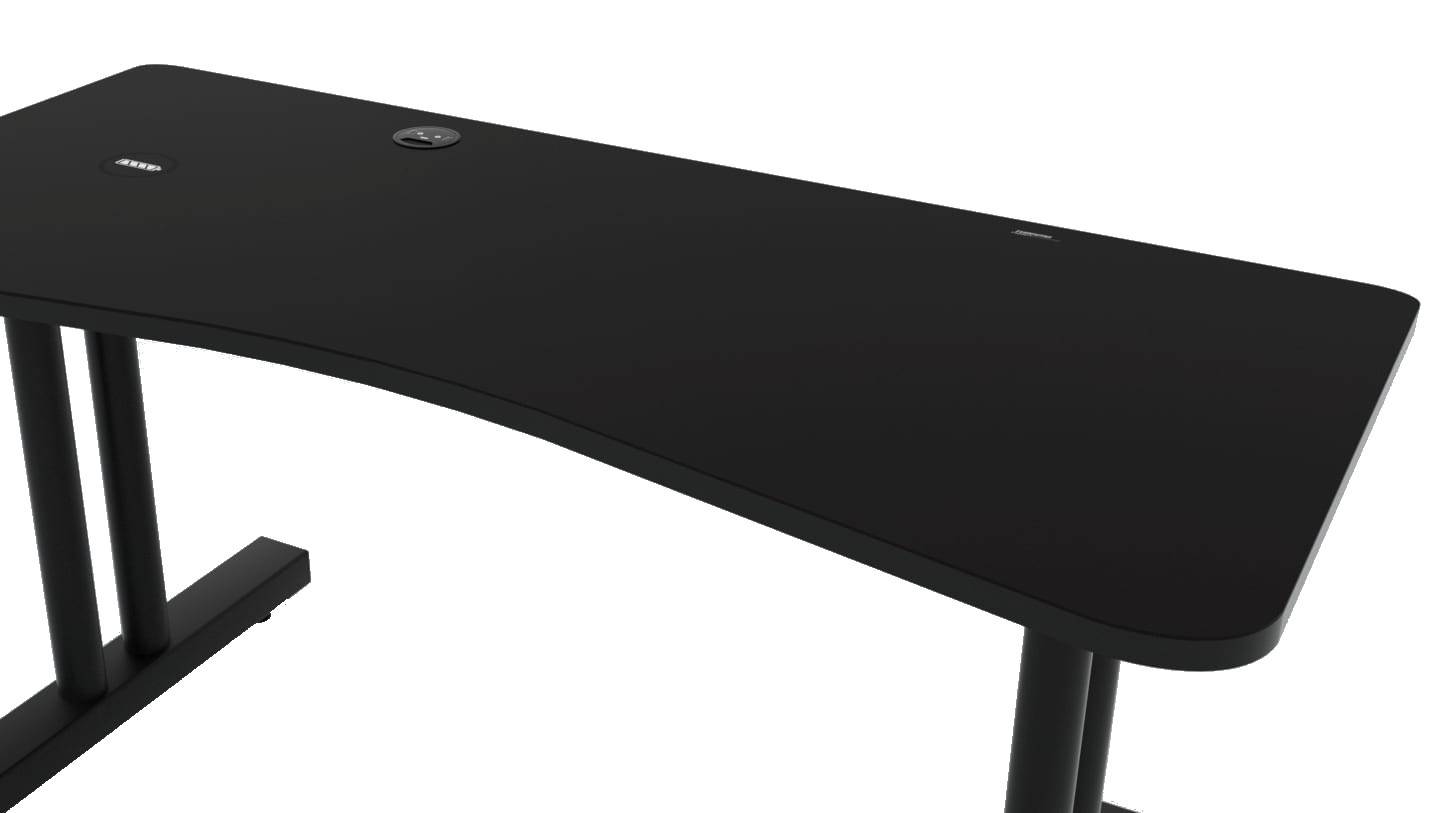 Infinity Mousepad
A custom microfiber surface with embroidered edges and thick padding to maximize comfort while gaming and provide a comfortable, streamlined surface that won't wear down your mouse or get it too dirty over time. This full-surface water resistant mousepad weight covers the entirety of the gaming desk, allowing for infinite peripheral movements and enhanced gameplay. 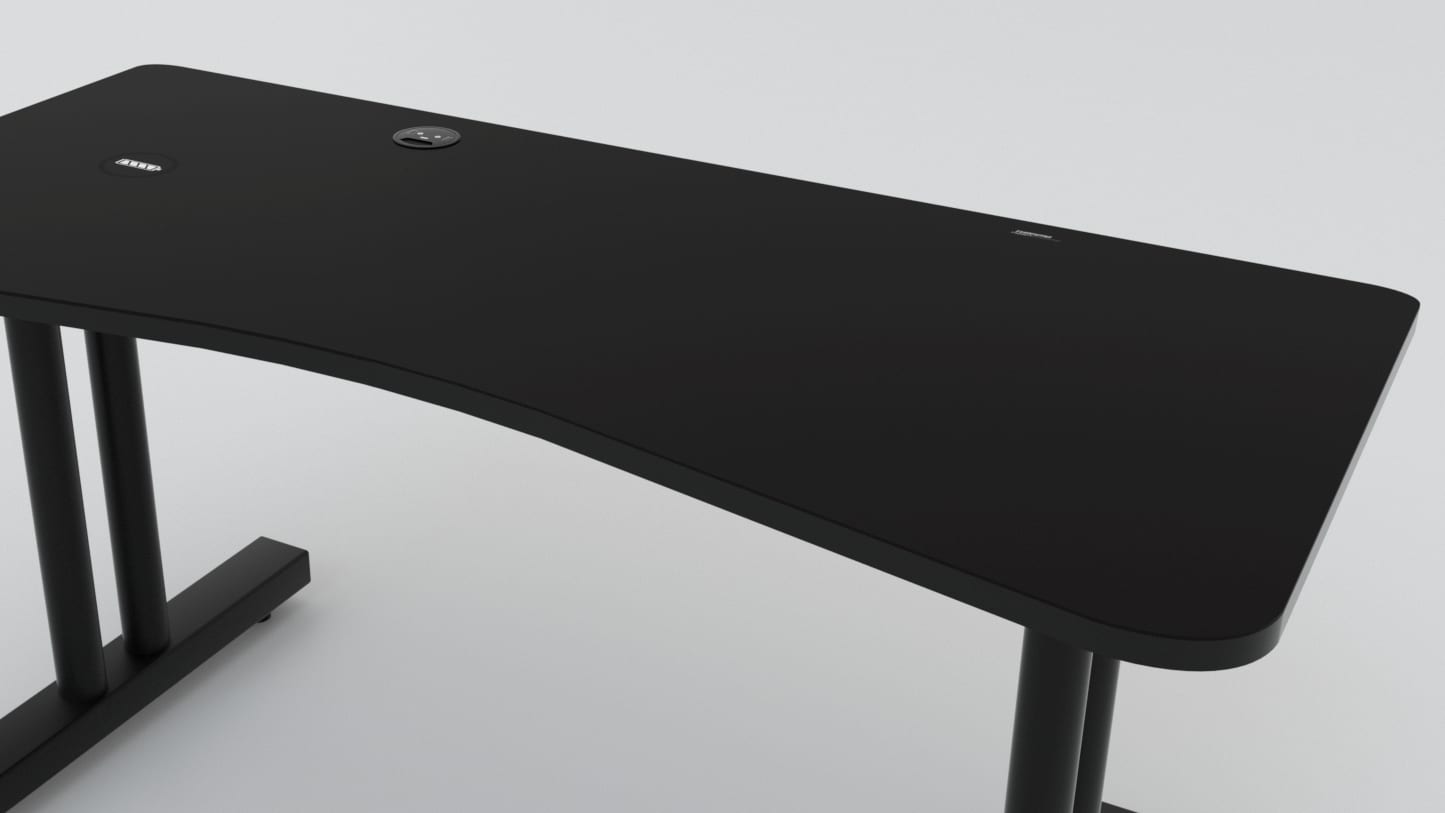 Epic amount of space. The wireless charger is kind of a bust, but overall for this price, everything else is a win. Stable, roomy, and pad covered.

This Table is Great! It holds its water in terms of quality and is very stable in all ways. The amount of Room you have makes it easy to place equipment. I can only recommend this to anyone who dreams of having a solid Table to play video games or work on. The assembly was also a piece of cake. No issues what soever. The Price point is under all circumstances valid in my opinion. You get what you pay for and with this Table it is Quality!
I haven’t even start on the Cable management. It is SO NICE, to store all your junky cables underneath the table top. Which makes it even more pleasant to Game on. Just coming into my office and seeing how organized everything is, makes the experience so much better!
Thank you, Turismo Racing, for coming forward and designing this Table that everyone should have. The Support Team is amazing and very responsive as well. I can’t say anything bad about the Team that helped me with my questions. They are great!

This Table is a must for everyone out there that likes an organized office space regardless if a gamer or not!

Exactly what I was hoping for. Didn’t see a lot of reviews out there but it did not disappoint. It’s plenty large enough for my needs. I have my pc, dual monitors on vesa mounts, and all the bells and whistles for streaming and gaming with plenty of room to spare. Seems sturdy enough , I don’t have any concerns of it not holding up. Was easy to assemble, took me maybe 25 minutes. It is pricey, but imo well worth it. I’d definitely recommend it! 👍

Only negative I can think is I should have got a standing desk, but that's a personal thing. For non-standing desk, it's amazing and worth the money. All the features you can see it provides, it does well. Only thing is I don't use the wireless charger enough but that's because my speakers are huge and cover it. Lots of space, sturdy, sleek and looks great. Cables hid well. My desk looks super minimal and nice thanks to the holes for wires. It would be cool if the power outlets in the desk had a surge protector, but idk they might, just a suggestion. Overall, worth the money and love that its a purchase I don't have to worry about or regret. My week of research paid off.

P
Pat O.
Everything I wanted

I spent a long time looking for a desk. A ton of DIY options like buying butcherblock and laying it on top of a frame. All of the other options were more expensive and far less fancy as far as tech goes. I wanted a huge desk that I could use for music production as well as gaming. I've finally got my full sized musical keyboard in front of me like I always wanted, and there's plenty of room to spare. Not to mention all the fancy tech this desk comes with, it's truly a dream. Killer price for a great desk.

I also saw a few comments about questionable build, but I put this thing together by myself with a bad back (not the best idea, I was just damn excited) and had no issues whatsoever.

I'm only a week in with using it, but there are no shortcomings whatsoever. Thanks for making such a great product!

Also, their support is phenomenal.

I absolutely love the Infinity Desk! After putting it together I have had 0 issues with it, it is sturdy, holds all 3 of my monitors, holds my blue yeti boom arm + mic, and gives plenty of space for my keyboard, mouse and a lot of other things I might feel like putting on it! The holes in the back are nice for cables to run through, making it so you aren't stuck feeding 10 cables through one holes, then on the bottom of the desk there is some cable holders to keep them all running nicely with one another. The usb hub on top is nice to plug in my headset dongle since I use a wireless headset and microphone cord for my blue yeti. The desk itself hasn't had any wobbling issues or any problems whatsoever, it's a premium desk that you pay for the quality and Turismo Racing delivers 100%!

But for all the pros there is only a couples cons such as the assembly. I ran into a problem right away with screwing the shorter screws into the brackets, one of the brackets the shorter screws went in fine, the other bracket they wouldn't move after a couple turns, luckily with the screw key that came with them, I was able to brute force them into the holes, and yes they were the correct screws for the brackets/screw holes. I wish I was kidding from how badly I had to brute force them, my fingers were sore for about 2-3 days after, probably would've been more if I didn't find a screwdriver around the house that matched the screws about halfway through the assembly. So just to be clear, the screws matched the screw holes, but I don't know if the screw holes were done correctly or what, but I had to use the screw key to brute force turn the screws into the holes, not every single hole, but all in all, probably about 8-12 of the holes were like this. The second thing I have to knock them for is not the desk itself, but the video assembly guide they provide on Youtube, for someone who before this has never put together a desk before, this was absolutely one of the worst assembly guides/videos out there. They weren't even assembling the Infinity Desk itself but rather a similar put together desk from Turismo. The people assembling it had the video zoomed out the entire time so you have to guess what parts go where, they also skipped parts of the assembling so you have to guess where stuff goes if you get lost/confused, they don't explain anything other than some text appearing on the screen saying screw (x) part into (x) part rather than zooming in and showing you where to screw everything in. Please Turismo Racing, for the love of god hire someone on Youtube or put together a video yourself of an in depth assembly video of the Infinity Desk so that people who aren't experienced with putting desks together or knowledgeable about that kind of stuff will have a much easier time.

All in all the desk is absolutely fantastic, worth the month and a half I had to wait for it (I ordered it at the very end of October and it arrived around December 15, I was well aware of the time I had to wait to get it so don't be fooled by that) and the money was worth it for such a quality desk, I would absolutely recommend getting this desk, you won't find anything better for the price. 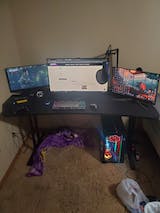 It's a great desk I love it

The cable management raceways below the desk make that everything stays neat and organized.

The desk has many extra USB ports on it which is great because that way you can charge your phone or other devices while working from home without having to take them out of their cases.

Every new gaming desk comes with our industry's best warranty and loyalty program - Turismo Care. We provide each original retail purchaser a 1-year warranty against defects in materials and workmanship of all parts.

This warranty does not cover:

- Installation of components, parts, or accessories not compatible with the desks sold.

- Damage or failure due to accident, misuse, abuse, or neglect.

- Desks used for commercial activities, including those in rental fleets and gaming arenas.

All consumables have a 90 day warranty.